Description: We’ll be looking for gadgets that let us write a value to memory such as mov [reg], reg.

First, we check the offset is still the same sending 41 “A” characters: 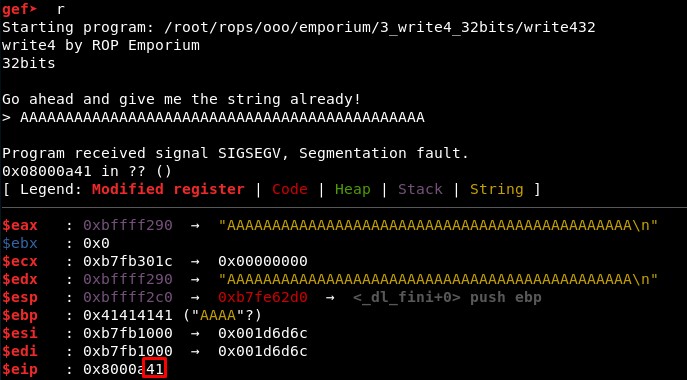 “Frequently, you’ll want to use a ROP chain in order to write something into memory. You may want to place the string “/bin/sh” into memory in order to use it as a parameter for system(), or perhaps overwrite a Global Offset Table (GOT) entry in order to redirect execution. (…).

If you know you’ll want to write something to memory at some point, you may want to start by locating these write-what-where gadgets and then determining if you can control those registers through the use of other gadgets.” (source)

We can find all these gadgets using:

We have these Write-What-Where gadgets:

Then we search for gadgets that could control EDI and EBP:

Next we need to figure out where to write in memory. The best option would be the .data segment. Let’s get the address of the “.data” section in the binary. Also, the .bss section is writable: 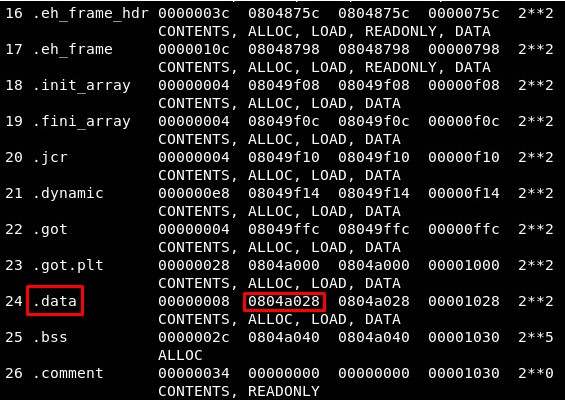 After this, knowing the string “/bin//sh” will be located in writable_memory, we can make the same that in the previous challenge “split32”:

Finally, the exploit is:

First we will use the “puts()” function, which is present in the

We will take the output, where the address has been printed, and will parse it. Then, knowing the offset of the “puts” function, we can calculate the base address of libc.